Dallas Cowboys Get The Job Done Against Undermanned Titans

Dallas Cowboys Get The Job Done Against Undermanned Titans is our today’s topic. The season’s final stretch continued on Thursday Night Football with the Cowboys facing off against the Tennessee Titans, promising the best NFL odds. Last year, Tennessee was the top seed in the AFC. They have lost five consecutive games and are in danger of missing the playoffs, despite being far ahead in the AFC South a month ago.

Cowboys quarterback Dak Prescott didn’t appear to care what the Titans did that week. Instead, he concentrated on gaining momentum for the postseason. 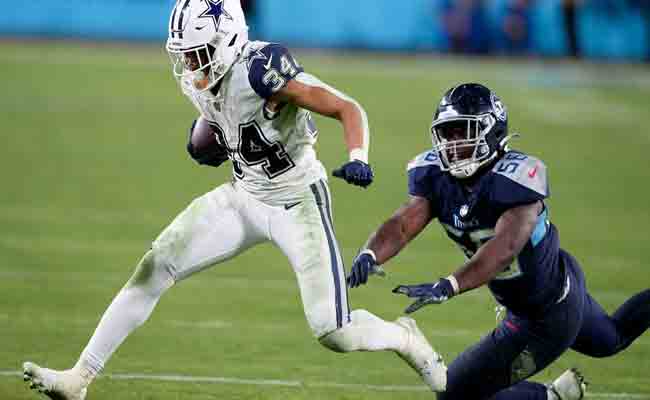 The Cowboys moved to 11-4 with a victory against the Eagles in Week 16 and got over their loss to the Jaguars in Week 15. It also preserved their chances of winning the NFC East, even though Philadelphia had to lose first.

Dallas (11-4) was already in the playoffs; thus, they played an atypical matchup against the Tennessee Titans (7-8). The Cowboys winning at Tennessee and then Washington in Week 18, will have won seven of their previous eight contests. There is a great deal of speed present.

The Titans’ game on Thursday night is a rehearsal, as the AFC South champion will be determined in next week’s game against the Jacksonville Jaguars.

Dallas Cowboys Get The Job Done Against Undermanned Titans

The Cowboys Get Their Win

The Dallas Cowboys maintained pressure on the Philadelphia Eagles in the NFC East competition by defeating the Tennessee Titans on the road Thursday night.

The Cowboys have stated that regardless of where they are in the NFC East race, they want to generate momentum heading into the playoffs. Thursday did not indicate that the lengthy playoff run would begin soon.

However, if Dallas is too focused on what the opposing team is doing, momentum is meaningless. Therefore, they will strengthen their confidence, maintain their momentum, and achieve their 12th victory.

The Titans gave running back Derrick Henry and other key players a rest in preparation for Week 18’s winner-take-all game against the Jacksonville Jaguars. In addition, they utilized quarterback Josh Dobbs and accumulated over 100 yards in penalties.

The Cowboys allowed far too many large passes to occur. Last week, the Eagles had seven throws of at least 20 yards. Thursday evening, the Titans scored four. Even if Ryan Tannehill were the starting quarterback for the Titans, the offense would not be described as “dynamic.”

Three of the receptions gained more than 30 yards. The Titans tied for third place with four explosives used this season. In the first game of the season, they tallied seven touchdowns, compared to five against the Green Bay Packers on November 17

Malik Davis was significantly more efficient than Ezekiel Elliott, who scored a touchdown but gained only 39 yards on 17 carries. The rookie who was not drafted had a career-high number of carries, rushing yards, and receiving yards.

In the Cowboys’ victory, Malik Davis rushed ten times for 39 yards and caught both catches for 23 yards.

Even if Tony Pollard (thigh) is healthy for the Cowboys’ Week 18 away game against the Commanders the following Sunday, Davis might still play if the Cowboys limit the workload of their top two running backs.

The talented tight end, Dalton Schultz, exploited a defense already inadequate for his position when it was at full strength, and much more so on Thursday when many starters were out. In the third and fourth quarters, Schultz scored touchdowns from 6 to 10 yards out, giving him his second two-touchdown game.

On Thursday, Schultz surpassed 50 receptions for the third consecutive season and will look to finish the regular season strong against the Commanders in Week 18 on the road.

The Cowboys received a little more than they bargained for against a Titans squad that was missing many players, including Derrick Henry (hip). This was especially true for Prescott, who lost his first season fumble and threw two interceptions for the fifth time in his previous eight games.

The Cowboys won the game after Dak Prescott completed 29 of 41 passes for 282 yards, two touchdowns, and two interceptions. Three times he gained 11 yards, and once, he lost the ball.

Prescott’s two interceptions led to Tennessee field goals, but he answered by guiding touchdown drives on two of the first three second-half possessions. One concluded with Dalton Schultz catching a touchdown pass, while the other with a field goal.

A week from Sunday, Prescott will play his final preseason game away against the Commanders in Week 18 of the regular season.